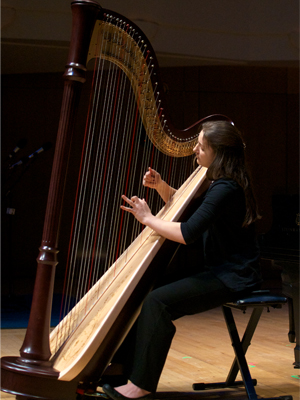 Abigail Enssle (harp), 17, is from Boulder, Colorado, where she is homeschooled. She has studied harp under the instruction of Pamela Eldridge for twelve years. A member of the Boulder Youth Symphony and the Greater Boulder Youth Orchestras, she was awarded second place in both the 2012 and 2013 concerto competitions. In early 2014, Abigail was awarded first place in the Broomfield Symphony Orchestra and Boulder Philharmonic concerto competitions. She toured Europe in the summer of 2014 with the Denver Young Artists Orchestra, and attended the Interlochen Summer Arts Camp where she was principal harpist in the World Youth Symphony Orchestra. Abigail’s joy and inspiration comes from a passionate involvement in the music of her church, believing that, as J.S. Bach said, “The aim and final end of all music should be none other than the glory of God and the refreshment of the soul.”