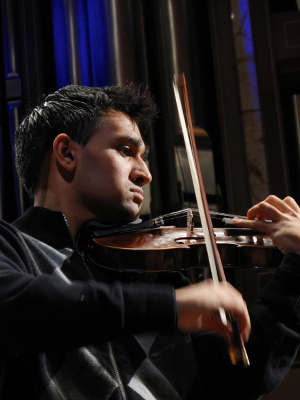 Aakash Patel (violin), 19, is from Carrollton, Texas. His passion for music led him to pick up the violin at eleven years of age. He began teaching himself how to play the instrument through the Internet and then joined his school orchestra. Aakash has since studied with Emanuel Borok, Sachiko Mori, and Jennifer Seagraves. Aakash has earned a multitude of awards, which include the first prize Dallas symphonic senior sonata division, first prize DSO Friedlander Concerto competition three years in a row, and first prize DSO Young Strings Scale and Etude competition. Aakash also received first prize in the Dallas Symphonic Senior Concerto Division. On the broadcast, he performs the first movement, Allegro non troppo, from Concerto Number 3 in B minor for Violin and Orchestra, Opus 61 by Camille Saint-Sans.

Show 265, Dallas, TX
Allegro Non Troppo from the Violin Concerto No.3 in B minor, Op.61 by Camille Saint-Sans with the Dallas Symphony Orchestra, conducted by Thomas Hong