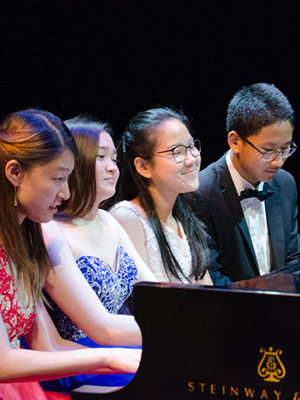 The piano ensemble performed the finale on Show 373 recorded in San Marcos, Texas on June 8, 2019.

Regina Lin, 15, is currently a student of Dr Alex and Marcy McDonald. She was a top prize winner at numerous competitions for the past eight years, including first prize at 2019 Baylor University Piano Competition; 2nd prize at Emory University Young Artist Piano Competition; first prize 3 years in a row at Texas State Young Artist piano competition; and first prize at 2016 TMTA solo competition. Regina made her orchestra debut with Round Rock Symphony Orchestra when she was 12, and also has been featured as Rising Star for 2017 Basically Beethoven Festival to perform a chamber and solo program. In 2016, she was the Grand prize winner in USA for CCTV Super talent show organized by the most famous TV station in China.

Antonio “Nio” Ajero, 15, from Nacogdoches, Texas has won numerous competitions including the Steinway Junior Piano Competition in Dallas, the Baylor/Waco Piano Competition, and Texas State University’s Young Artist Piano Competition. He made his orchestral debut with the Marshall Symphony Orchestra. Nio is currently a Young Masters scholarship student under the Texas Commission of the Arts and Texas Cultural Fund. He participated in the Cremona International Music Festival and will attend the Aspen Music Festival and School this summer. Nio is a two-time National Gold Medalist from The Royal Conservatory for earning the highest marks in the United States for the Level 9 and 10 Piano Exams. He studies piano with Linda and Andrew Parr.

Erin C. Fitzgerald is a sophomore at Lake Travis High School in Austin, Texas. Erin has been playing the piano since she was five years old and is currently studying under Shearon Horton. Erin has placed in competitions such as the Austin District Music Teachers Association Solo Contest, the Texas State Young Artist Piano Competition, the Steinway Piano Competition, and the Schedler Scholarship Contest. She was also a state finalist in the 2016 and 2017 Texas Music Teachers Association State Competition. Erin has served as an Austin Youth Music Ambassador from 2015-present, and has participated in the New Orleans Piano Institute and the Texas State International Piano Festival. In school, she is currently involved in orchestra, chamber music, DECA.

Ella Kim (piano), 11, is from Herndon, Virginia, and is currently a sixth grader at Navy Elementary School. Ella studies piano with Dr. Wenyin Chan at the Levine School of Music. Ella has won numerous awards, including first prize at the International Young Artist Piano Competition in Washington, DC, the American Fine Arts Festival International Piano Competition, the Virginia Music Teachers Association District Auditions, the Steinway & Sons Piano Competition in Washington, DC, and the Washington Music Teachers Association Haydn Sonata Competition. Ella was featured on WQXR, and has performed at the Millennium Stage at the Kennedy Center, Carnegie Hall’s Weill Recital Hall, the Ward Recital Hall at the Catholic University, the Embassy of Hungary, the Embassy of Poland, the Embassy of the Netherlands, the Embassy of Austria, the National Institute of Health, and the US State Department. Ella has received instructions from renowned artists such as Tamas Ungar, Marina Lomazov, Joseph Rackers, Enrico Elisi, and Alvin Zhu. Outside of music, Ella enjoys tae kwon do, reading, watching movies, and spending time with her siblings.